Logo design: the devil’s in the details

Logos. They’re everywhere we are. Maybe we don’t think we pay too much attention to them. But some of our more ubiquitous brands’ logos have gone through both major and subtle design overhauls — for better or worse. Here are a few examples.

Xerox is a steady, solid brand — we all know the company; we all know what they do. But if I were to ask you what their logo looks like, you’d probably scratch your head. This is in part because they’ve changed their logo extensively over a period of years. They’re a company of success, however their brand identity is lacking. 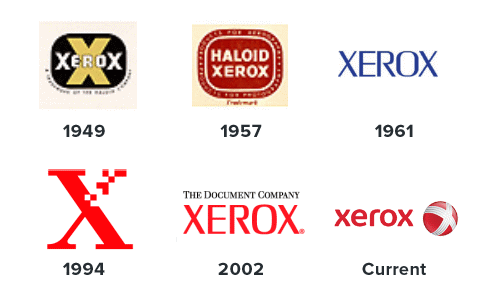 However, if I were ask about Starbucks, just about anyone living in the US and would recall a green circle with a white-outlined lady.

If we look at Starbucks logo evolution, we see not too much has changed since 1971, when they changed color identity from brown to a forrest green. Any new coffee shop starting out would do well to avoid a similar forest green, as it’s become practically synonymous with Starbucks coffee.

I do find it interesting to the see extensive evolutionary changes to company logos, and here are some excellent examples of some of the most iconic logos and their evolutions. However, I often find that a massive logo overhaul tends to signify identity crisis within the company. And that angst can expose a company’s perilous position. Back in 2010, Gap was experiencing slowed sales and felt the company could be revitalized from a modernizing logo change. They tried to stray from the original logo, which used a simple serif typeface to what they considered a “modern” interpretation. Here’s how that worked out:

The funny thing was Gap already had a fairly solid brand identity. The original logo was simple, clean and widely recognized. And instead of boosting sales with a “modern” logo overhaul, they introduced another problem to company. The logo change caused such an uproar, that Gap reverted to the old logo design.

I find Google’s logo evolution to be an interesting case. Just about any human who spends even a small amount of time on a computer will be able to identify the Google logo — a simple serif typeface. Even Google’s primary color palette is very distinct — and like with Starbuck’s forrest green, now just about anytime a brand tries to use a blue, yellow, red and green combo, it conjures Google thoughts.

Over the years, Google made simple changes to its logo design, first, by simply changing the uppercase “G” to Blue. Then, just a simple transition from more 3 dimensional skeuomorphic letters to a clean, flat design that conveys a subtle elegance.

We all know Google as an incredibly powerful and well established company. What I find amusing is if you were to take their logo in a vacuum — with Google’s clout stripped — most would likely see an innocuous, childlike design. The primary color palette alone gives the logo a very playful identity. Yet Google’s success, coupled with minimal logo changes, has created one of the most solid brand identities and recognizable logos for arguably one of the most powerful companies in the world.

(And for the super design nerds: recently, Google made another tiny change logo change — a minor tweak to the “g” and “l.” Did you notice?)

Know the FedEx logo? Almost certainly. The FedEx logo has won numerous awards for their design and use of negative space in their inclusion of a white arrow that forms between the “E” and “x.” The use of clever negative space is what makes this logo so special.

It wasn’t always this good. FedEx used to be called Federal Express, but customers at the time liked to shorten the name, referring to the company as “Fed Ex.”

Matthew May of Fast Company Design writes a bit about the creative process and design brief of designer Lindon Leader, who created the current (and iconic) FedEx logo:

The goal was to communicate the breadth of [FedEx’s] services and to leverage one of its most valuable assets–the FedEx brand.”…FedEx’s CEO, Fred Smith, placed high value on design and had an intuitive marketing sense…He said okay to a brand name change and authorized a new graphic treatment. He said do whatever we wanted, under two conditions. One was that whatever we did, we had to justify it: ‘You can make them pink and green for all I care; just give me a good reason why,’ he said. The second one was about visibility. ‘My trucks are moving billboards,’ he said. ‘I better be able to see a FedEx truck loud and clear from five blocks away.’ That was it!

And since then, they’ve made no changes to the logo. Best not to mess with a good thing.

If a company’s brand identity is floundering, a logo redesign may be the solution. However, the job of a logo is to create an image your customer will associate with you and your product. The challenge becomes this: if the logo is continuously undergoing change, then that important visual recall will be difficult to establish. But it can be done with success. And what better example than Coca Cola, a logo and color palette we all know well: 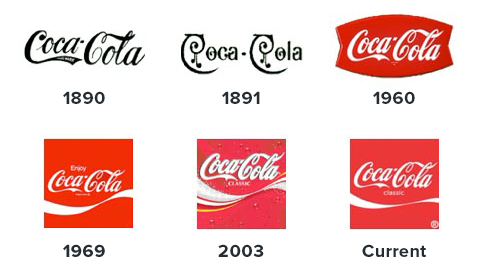 Coke’s logo has been through some evolution, but in terms of brand identity, like Google, they’ve never strayed too far. And in this way, they’ve always been able to evolve their logo while still retaining its recall.

Each of the companies featured here have found great success over the years — and it’s fair to say that’s in some part thanks to a strategic logo design. Just one good reason why new companies should take care in designing a logo that the whole team can, uh, get behind…