Logo design strategy: one of these yoga studios is not like the others (Part 1)

I recently had the opportunity to work on a new logo design for a small yoga practice. (FYI: Office yoga lessons are a great way to start the brand identity conversation.) I decided to document the experience from beginning to end in a two-part series, with some commentary peppered through out to give a peek into a designers process for creating what is arguably the most important (certainly ubiquitous) design element of a brand’s identity.

Rec Room cofounders Jenny and Maureen gave me a wide open space to work within: they wanted a logo that clearly represented their name, leaning toward a less conceptual approach. That was about it — color, typeface and imagery were all up to me.

I often like to take a first pass at doing a bit of blind “discovery” before researching existing designs. To me, an obvious starting point was in reforming and rearranging the two Rs that make up Rec Room Yoga. I was weary of placing them back to back — haven’t we already had enough?

I wasn’t going to completely ignore that solution, but I needed to have a really good reason for choosing it.

Before jumping on Illustrator, I went to pen and paper — just placing the two Rs in different angles to get a feel for placement:

Upon arranging them to face each other, I discovered that the leg of each of the Rs, together created the fork of a Y. Neat. 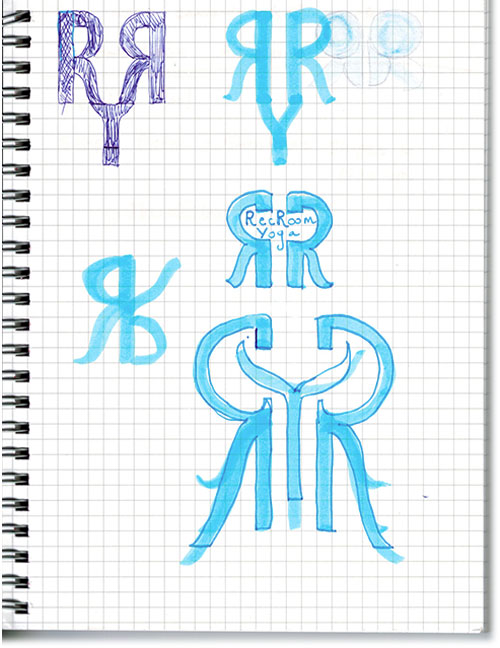 Once I had a few versions on paper I wanted to explore futher, I took to Illustrator. I began designing specifically in grey-scale, as I didn’t want the color I chose to influence the design in any way. Designing in black and white or grey-scale breaks the design down to a minimum and gives the designer a better sense of how the logo will appear against light colors such as white, and darker colors such as black.

I also wasn’t going to explore typeface or perfecting the shapes and letters just yet. I was just experimenting to see how the letters, words, and shapes would interact with each other. Color and typeface would come towards the end of the process, when finalizing the design.

Here’s my first pass in Illustrator:

Since I’d be seeing the founders that evening, I decided to show them my very first pass (with a bunch of disclaimers about color, typeface, and shapes). I wanted to hear their initial reaction, and see if this could be a kind of conversation starter to tease out any addition direction around what they might be looking for.

They were pleased with the first round. They gravitated to the center logo design where the two Rs were placed further apart. They were not a fan of the star shape created when they are butted up against each other.

With that knowledge, I went off for round two. I decided to do some research first.

When I think of yoga logos (say that 10 times fast!), I tend to think of what I consider hippie-new-agey imagery, influenced by Buddhism and Hinduism.Stuff like this:

Or letters arranged in the form of a yoga pose (this was, in fact, the design solution I saw the most in my search):

Or had trees and flowers to represent a peaceful space:

I was fairly certain I wanted to stay away from that visual direction, as I felt that would do them no favors in setting them apart from the rest. Plus, anyone remotely familiar with yoga already knows it’s associated with peace, serenity, and connection. No need to beat them over the head with a manzanita tree branch (to speak figuratively).

What’s in a name?

I started thinking about the words “Rec Room Yoga” — what is it about their name (and business model) that sets them apart? Yoga in the work environment is more about taking a break. And rec rooms should be fun, playful spaces.

Both of the founders are laid back and have a good sense of humor. I had taken one of their classes and while it was relaxing it was also fun and lighthearted. When I thought of a rec room, images of a fun, vibrant space with exercise ball-seating came to mind. I thought of fun colors and simple shapes.

I decided to explore a playful route, and wanted to see what the two Rs might look like if they were comprised of circular shapes.

Here were my initial sketches: 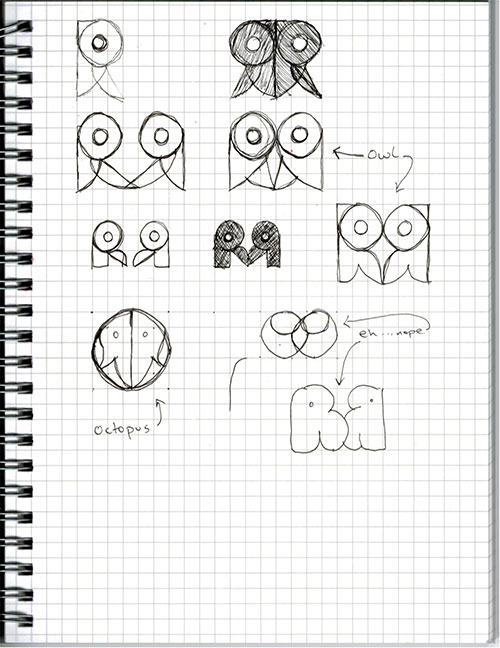 Then I jumped onto Illustrator and began fleshing out some of the designs.

Since Rec Room Yoga sessions were in an office setting, i explored whether there a way to illustrate that in the logo. It would be too small/abstract to try to depict an office space within the actual logo, but when I turned the second R upside down — it was sort of like each R was doing yoga.

The R doing yoga represented a place of fun and relaxation. This gave me the idea to place the words “work” and “play” into the round spaces of the Rs. (“Work” in the right-side up R and “play” in the upside down R, natch.)

I applied a similar concept to the other design variation with the reversed R for getting out of the normal work headspace. The two Rs facing each other also created an arrow, which I felt was a good holding place for “Rec Room” which would then point down to “Yoga”: 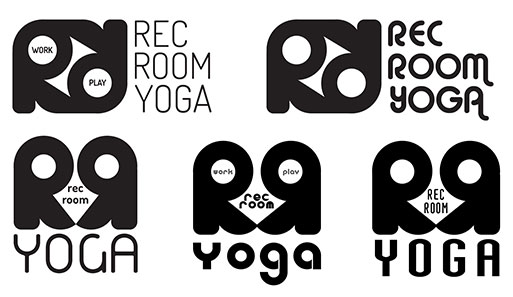 At this point, I felt I definitely wanted to stick with a rounded lettering, so I took a few rounded typefaces out for a spin to see which would shine. Once I had a few options I liked, it was time to show the clients…

Click HERE for Part Two’s exploration into the wild world of color and typeface… and see the final reveal!