This anecdote illustrates an important point: smart marketers need to pay attention to how they address their audience or potential customers in their writing. Using gendered copy can give the false impression that you subconsciously associate your industry or product with one gender, and that those who do not identify as that gender are not within your target demographic.

Gender issues are far too complicated to address in a short blog post, and I won’t attempt to wax philosophic here. That said, making content gender-neutral isn’t a difficult process. Here are some simple strategies to help you avoid blunders.

The biggest contributor to the gendered content issue is the pesky pronoun. Talking about the person who is the subject or object of your sentence is tough without pronouns. However, there are a few tricks you can use to work around it.

Designers need to discuss licensing costs with their account manager before deciding whether or not to purchase a rights-managed image.

Here, I’ve made the subject in my sentence plural (“designer” became “designers”). This lets me use plural pronouns to discuss them, their actions, their possessions, and so on.

Alternatively, you can use the second person narrative mode to directly address your audience.

Take another look at the sentence I used in the previous section:

In this case, I’d rewrite the sentence so that I am directly addressing my reader:

As a designer, you need to discuss licensing costs with your account manager before deciding whether you’ll purchase a rights-managed image.

This approach won’t work if you don’t want to directly address your reader (for example, if your ideal reader is the person managing the people who will use your product), but it is effective nonetheless.

There’s yet another way to create gender-neutral content, but it’s the one I like (and use) the least. It follows the antiquated tradition of referring to people (either yourself or a third party) as “one.” For example:

Suppose one were to encounter Tilda Swinton in person; what would one say in that instance?

To my eyes, that usage smacks of either “I, Robot” or Charles Dickens: completely disconnected from humanity and/or hopelessly out of date. Modern people don’t talk that way. Though, it can be used to create regular content as a last resort. Using our previous example, this treatment would create the following sentence:

As a designer, one should discuss licensing costs with one’s manager before deciding whether or not to purchase a rights-managed image.

Third Person… with a Twist

There’s a trickier way to handle this type of writing which takes a little more time and effort.

Let’s look back at the example I used before:

Instead of using plural nouns, I could instead rephrase the entire sentence:

A designer’s account manager should be consulted before deciding to purchase a rights-managed image.

Designers’ account managers should be consulted before purchasing a rights-managed image.

In these two cases, the narrative perspective is still third person, but the sentences have been carefully worded to remove any need for pronouns. This is more of a skill than a practical guideline, so be prepared for some trial and error if you take it on.

So, there you have it: a quick and simple guide to writing gender-neutral content. It doesn’t take much effort to give your content more universal appeal and avoid offense. It’s a win-win scenario, for you and your audience. 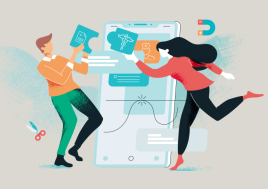